Why are Steel Structures Used in Most Construction? 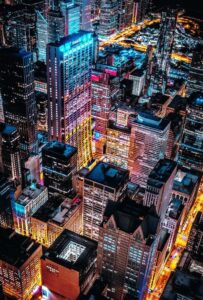 Did you know that steel is a high-strength grade of construction material?

Steel, known for its reliability and cost efficiency, is considered the go-to material for construction purposes. How are steel structures cost-effective and at the same time the go-to material? Well, it requires fewer raw materials, is lower-maintenance and inexpensive to manufacture, and steel structures are generally more durable than those constructed from other materials because the alloy can endure severe weather conditions. It also staves off rust and mold accumulation, giving the material a longer lifespan. For all these reasons, using steel is widely considered a great long-term investment.

Modern contractors and designers use the material for all types of structural engineering work. Steel can be shaped to accommodate each project’s unique specifications – some of the potential forms it can assume include round tube (HSS), plate, an angle, and wide flange, among others. Its flexibility allows engineers and architects to bring their beautiful designs to life. So, if you’ve ever passed a modern bridge, building, or tower that caught your attention and wondered what it was made of, the answer is probably, at least partially, steel!

If you are curious about buildings and/or bridges built with steel, here are three famous examples:
1. The Empire State Building, located in New York City, was constructed in 1931. The Empire State Building once held the record for being the world’s tallest building. It was designed by William F. Lamb, who drew inspiration from art deco aesthetics.

2. The Brooklyn Bridge, also located in New York City, was constructed in 1883. It is known for having been the first steel-wire suspension bridge in the world. The original designer was John Augustus Roebling, who sadly succumbed to injuries he obtained from an accident he had on the bridge. His son, Washington Roebling, continued his work, but also suffered an accident that led to him developing a sickness, and his wife Emily Warren Roebling subsequently stepped in to help him finish the bridge.

3. The Burj Khalifa, located in Dubai, United Arab Emirates, was constructed in 2006. This building is currently the tallest in the world. It was designed by Adrian Smith, and according to the ruler of Dubai, the inspiration that led to its construction struck him during a previous visit to the Empire State Building.